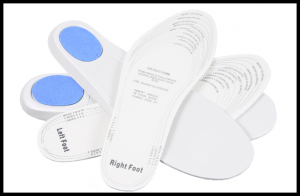 Orthotic devices come in many shapes and sizes, and materials and fall into three main categories: those designed to change foot function, are primarily protective in nature, and those that combine functional control and protection.

The so-called rigid orthotic device, designed to control function, is often composed of a firm material such as plastic or carbon fiber, and is used primarily for walking or dress shoes. Such orthotics are made from a mold after a podiatrist takes a plaster cast or other kind of image of the foot.

Rigid orthotics control motion in two major foot joints that lie directly below the ankle joint and may improve or eliminate strains, aches, and pains in the legs, thighs, and lower back.

Soft orthotics usually absorb shock, increase balance, and take pressure off uncomfortable or sore spots. They are typically made up of soft, cushy materials. Soft orthoses also are worn against the sole of the foot, extending from the heel past the ball of the foot, including the toes. Such orthotics are also made from a mold after a podiatrist takes a plaster cast or other kind of image of the foot.

While over-the-counter orthotic inserts help people with mild symptoms, they normally cannot correct the wide range of symptoms that prescription foot orthoses can since they are made to fit a person with an “average” foot shape.

To our valued patients:

We are currently open back to our full regular schedule.

Please be assured that we are taking several precautions to help prevent the spread of the virus and keep our patients and staff healthy.

Each exam room is being wiped down with an anti-viral before and after every patient. Our staff are wearing masks and utilizing gloves or hand sanitizer during the exams and we have spaced out the seating in our waiting room. Unless you request otherwise, doors will remain open to avoid touching of the door handles.

We ask that you do your part to keep everyone safe as well. Please refrain from bringing extra family members to your appointments and re-schedule your appointment 2 weeks out if you have been exposed to the virus and/or are experiencing any signs or symptoms of being sick.

We are offering telemedicine visits for those that are unable or are uncomfortable with coming to your appointments. Please call the office to schedule a time to speak with your doctor.

We thank you for your continued support of the Mill Creek Foot & Ankle Clinic and look forward to seeing you.